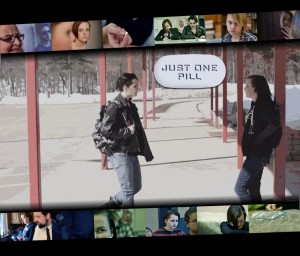 SANFORD — “Just One Pill” is the title of a film produced by Sanford High School’s film club. It premiered Wednesday night at Smitty’s, a local movie theater.

“Just One Pill” tells a story of the ease in which young people — or anyone, really — can fall under the spell of drugs.

Written by former student Sara Champagne and student Eve Kruger — Kruger also directed the film and played one of the lead roles — it is set at Sanford High School, but it could be any high school, anywhere.

“Paula is a recreational user, but her girlfriend Charlie gets addicted easily,” said Kruger.

In deference to future showings, the newspaper is remaining mum about the remainder of the plot.

“Just One Pill” was created after Strategies for a Stronger Sanford — hosts of the premiere — approached the film club to produce public service announcements speaking to the drug theme.

“We have an ardent belief that drug and alcohol messaging has to come from the youth,” said Lynne Hatch of SSS, which is tasked through a federal grant with providing substance abuse prevention to 13- through 18-year-olds. “We told them we needed help with messaging, and they led with it. They should be incredibly proud.”

The PSA, created by the film club and which were shown Wednesday after the film, are stark and hard-hitting — and will be seen regularly by local movie-goers at Smitty’s, said film club advisor James Harmon.

“Just One Pill” will undergo more editing this summer, and will be shown at the Sanford International Film Festival on Oct. 18.

School Superintendent David Theoharides, who spoke before the opening images of “Just One Pill” flashed on the screen, said school personnel are reporting to him that there are increased incidences of drugs at school, particularly since the legalization in January of marijuana for adult recreational use.

“It scares me and it scares the School Board,” said Theoharides. He said the youngsters say their parents tell them marijuana is now  legal — but he pointed out it isn’t legal for people under 21-years-old.

Champagne  and Kruger began writing “Just One Pill” last summer, before Champagne went off to Salve Regina University in Newport, Rhode Island, so she wasn’t involved in the production itself.

“I thought it came out really, really well,” she said.

As to the writing, she said she and Kruger started throwing ideas together.

Kruger said she would vocalize what she was thinking while Champagne typed what she said, and vice versa.

Harmon thanked the entire cast and crew — some who took part for just a short time, others throughout the project — some with just one task, others with multiple tasks to juggle.

He pointed out “Just One Pill” is the beginning of a story.

May 2021 Strategies for a Stronger Sanford Fundraiser

“This is Us” Project

Substance Use Disorders Resources, Sanford ME

“Just One Pill” substance use film by Sanford Film Club

“Just One Pill” substance use film by Sanford Film Club